A while back I bought a club pack of cheese tortellini. That’s two, 20-ounce packages of tortellini. The first dish I made was a total flop, so I really wanted something great for the other package. I did a few searches and nothing was jumping out at me. Apparently most people use tortellini in soup, which I didn’t feel like making, or they just toss it with a simple sauce. I wanted a flavorful, complex sauce to balance the blandness of the tortellini (let’s be honest, cheese tortellini aren’t exciting on their own). 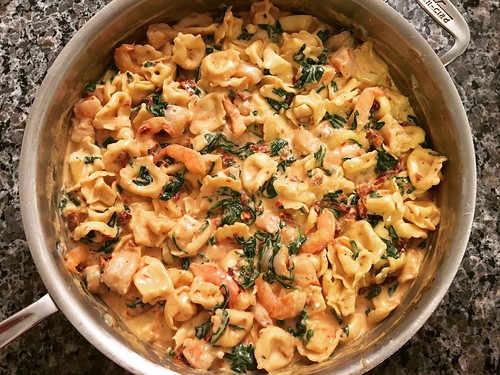 I finally stumbled on this AMAZING recipe for Tortellini with Spinach and Sun-Dried Tomatoes. Seriously, this was SO GOOD. Even Steve, who hates sun-dried tomatoes, loved this meal. I bulked it up with some cooked shrimp, but you could also use chicken or sausage, or leave out meat all together.

I can’t wait to buy another club pack of tortellini so I can make this again!

Boil the tortellini according to the package directions.

While the tortellini is cooking, melt the butter in a large skillet over medium heat. Add the garlic and cook, stirring, until fragrant, about 30 seconds. Sprinkle in the flour and stir until a paste is formed. Whisk in the heavy cream, half-and-half and chicken broth. Season with a little salt and pepper, then add the Parmesan cheese. Simmer until the sauce thickens, about 5 minutes.

Stir in the spinach, sun-dried tomatoes (fish them out with a fork. You want some of the oil in the sauce but not the whole jar’s worth), and shrimp/chicken/sausage, if using. Once the spinach is wilted, add the cooked and drained tortellini and stir to coat the tortellini with the sauce. Serve immediately.

NOTE: If you want to bulk this up a bit, you can add cooked shrimp, chicken or Italian sausage. I used shrimp that I seasoned with salt and pepper then seared in a hot skillet with a little oil. Once the shrimp were cooked I cut them in half (or thirds if they were big) so they were bite-size. If you want to do chicken or sausage instead, cut them into bite-size pieces and cook in a skillet with a little oil (be sure to season the chicken with salt and pepper).