I’m a sucker for shrimp and grits. If I see it on a menu, I have to order it. I just love the creamy, soft grits topped with the bursty, delicious shrimp. I’ve tried making it at home a few times, but wasn’t successful. Now my search is over – I’ve found THE BEST recipe for shrimp and grits. This was Katie’s first time eating grits and she literally licked her plate clean. Steve couldn’t stop raving about it either. We were all silent as we ate, each of us savoring the delicious plate of food in front of us. 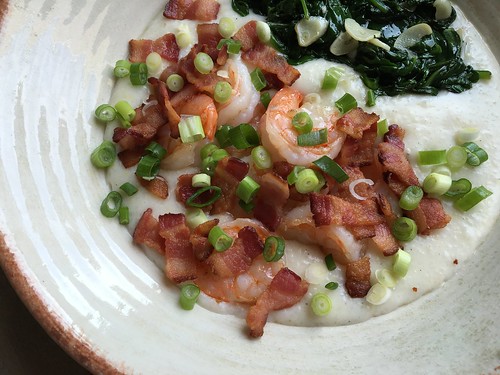 The recipe could not be simpler – grits are cooked in a mixture of chicken broth, milk and butter. Aside from stirring them every once in a while, they cook themselves. Shrimp are cooked in delicious bacon fat with a little garlic. The whole thing takes less than 30 minutes to prepare, making it the perfect weeknight meal. 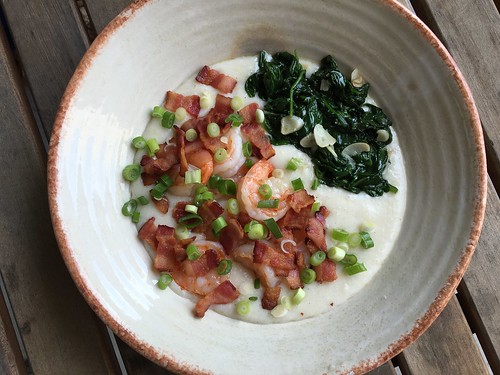 I served the shrimp and grits with spinach sauteed in oil with some sliced garlic. It was the perfect accompaniment, especially since I could just plate it alongside the shrimp. The only thing I might do is add a little fresh chopped tomato – not because the dish needs anything but for that hint of freshness and acidity.

The Best Shrimp and Grits
As seen on The Redhead Baker, originally from Taste of Home

Combine the broth, milk, butter, salt and pepper in a large saucepan over medium-high heat and bring to a boil. Slowly whisk in the grits. Reduce the heat to low and cover. Cook for 20 minutes, stirring occasionally. Add the shredded cheese and stir until melted. Set aside covered, and keep warm.

In a large skillet, cook the bacon over medium heat until crisp. Remove to a paper towel-lined plate with a slotted spoon; reserve drippings in the skillet.

Saute the shrimp and garlic in the bacon drippings. Flip the shrimp as soon as they turn pink. Remove once both sides are pink.

To serve, divide the grits into four bowls. Top each with one quarter of the shrimp. Garnish with the reserved bacon and scallions.