We all love risotto. I see it as a blank slate, the perfect starting point for whatever combination of flavors you happen to want that day. I recently saw a recipe for Sweet Corn Risotto on Iowa Girl Eats and figured I better make it ASAP before corn season is over. 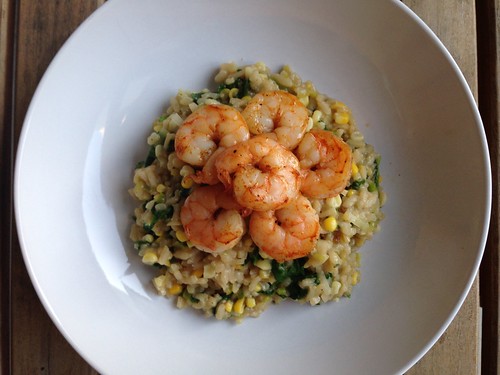 I’ve been on a shrimp kick lately, made possible by a sale on frozen shrimp at Acme. I love Ina Garten’s method for roasting shrimp – it’s so easy and flavorful. I threw in half a bag of baby spinach once the risotto was done for a little color and extra veggies and dinner was served. 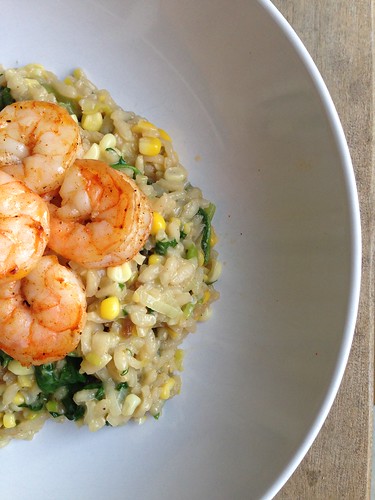 This was wonderful with fresh corn, but I imagine I’ll make this again multiple times this winter with frozen corn and it will be just fine. Don’t let the fact that corn season is over deter you from trying this recipe.

Important note: You need to soak the leeks before you start cooking. After the leeks have been cut as directed above, place them in a bowl of water for at least 30 minutes. Swish them around a few times, making sure to separate all the pieces. Leeks are VERY sandy and you don’t want grit in your risotto. After they’ve been soaking for 30 minutes, drain in a colander and rinse with fresh water.

Bring chicken broth to a boil in a saucepan then turn heat down to low to keep warm.

Melt 2 tablespoons butter in a large skillet over medium heat then add corn, leeks, and garlic, season with salt and pepper. Saute until leeks are tender, about 10 minutes. Remove mixture to a bowl then set aside.

Melt remaining tablespoon butter in 1 tablespoon olive oil in the skillet then add the shallots and saute until starting to turn tender, 2 minutes. Add rice then stir for one minute. Add wine then stir until nearly absorbed by the rice. Add two ladlefuls of chicken broth then stir until nearly absorbed before adding another two ladlefuls. Repeat until the rice is creamy and al dente, 25-30 minutes. Be sure to taste the risotto when you’re nearing the end of the chicken broth, in case you need more.

While the risotto is cooking, preheat the oven to 400 degrees F. Peel and devein the shrimp. Place them on a sheet pan with 1 tablespoon olive oil, salt, and pepper. Toss to coat, then spread them in an even layer. Roast for 8 to 10 minutes, just until pink and firm and cooked through.

Remove the risotto from the heat then stir in the Parmesan cheese, corn and leek mixture, and the spinach. Season with salt and pepper to taste then serve topped with the roasted shrimp.