Alhamdulillah Silaskota 14 has been implemented. After going through a series of long preparations and needing sacrifice, this event is finally over.

The realization of Silaskota 14 started with Obi who came to my house at night, then we talked about how our beloved village will be in the future. Indeed, when I talk to Obi, it’s really that heavy, wow. And finally that night we agreed, before next year it will be more difficult for us to ‘give something’ to Kauman, so finally we intend to organize an event that should be chaired by Handis, but instead he goes to college in Surabaya 🙂 After that meeting after meeting passed. There are arguments about concepts, competitions, and even consumption. But what is different from doing events in Kauman and outside of Kauman are the children. Why can’t you always not laugh when you are with the Kauman children? No matter how upset you are with them, you can still laugh at them. Anything can be a source of laughter for all of us. Maybe it’s because we both grew up in Kauman, so it’s as connected as it is connected, so it’s not uncommon for many to be baper together :)))

Back to the event. At first Obi asked me to be secret (again for the umpteenth time). But I refused because I was tired of the secret period, bzzz. Then it’s an event. At first I thought that being a Silaskota event wasn’t that hard. Until finally at what meeting Obi said that he had a boarding school at UII, which had to be there every night except for Sunday nights. Yes, solid. Feels like a gledek oath. At first we agreed to take care of it together, finally… I was left behind 🙁 Well, the next day was spent working on concepts & decorations, coordinating competitions, and publishing. Again, I think I can because I have been on the Silaskota committee many times and two When it becomes secret, at least I know where Silaskota usually has problems and so on. But in fact, mundas is unbearable, then ends with ………crying :))) Fortunately, when mundas is crying, the former candidate the chairman wants to listen to my splice and wants to help even from afar, the main thing is, wow. Try if you don’t help him, you’ve already run away from my Kauman :)))

…blablabla. Finally arrived at D-1 Silaskota 14. Since morning I’ve been in various Obi lines and I also happened to be skipping school HAHA but there was band practice so I couldn’t take care of various things. After finishing the band, I went straight to the secretariat to take care of all kinds of needs. Then Obi invited him to buy door prizes and I asked him to buy ice cream, wow. Until the secretariat again, the plaza and the square are full, you can’t go out again if you ride a motorbike. Then immediately prepare the az that will be needed on the D day. Then it turns out that the participants have exceeded the target and quota, it’s really like a broken faucet, it doesn’t stop when someone registers, making recaps don’t finish either :’) Finally, the consumption has doubled. Then prepare the place and everything, including the coordination meeting until it’s already 11 o’clock. Cocard just arrived and immediately decorated the place with balloons and cute paper. Some of the male committee members disappeared because they took advantage of the traffic jam to park :)) Faisal just came to eat and help for a while and then snored 🙁 Until finally it was 2 in the morning and I was so tired, I woke up Faisal then said goodbye to Obi and wanted to go home first. when I got home, there were still a lot of male committees who continued with the decorations, then put up banners, etc., made a photobooth until 6 am when I came back to the secretariat. The difference is, I’ve taken a shower and have worn a corsa, they’re still wearing t-shirts and haven’t slept. Anyway, they’re really good Willing to not sleep to prepare Silaskota, even though I know for sure at the event they will find time to sleep wkwkwk.

When the event started, I thought I would relax by just doing PJ in the little da’i contest and playing the mc. It turns out …… still have to go around all the places of competition yahh. Even though I’ve used HT, it still feels like my legs want to break 🙁 Playing on the porch of the mosque which is that big, then going to the SD where CCA is, stopping by the library where the tartils are, then going forward to make sure you’re all playing MC’s, then going to the secretariat to check if there’s any what’s the problem with ht sekre who doesn’t know where 🙁 and then back to the foyer and like that it continues from 7-12 o’clock 🙁 But I really appreciate all the committees who are sensitive and take initiative <3 Until finally all the competitions are over :) 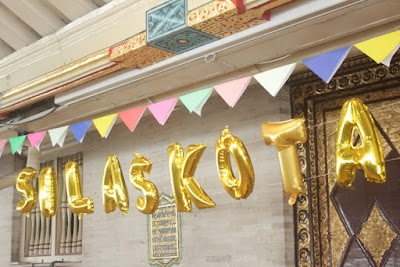