For some reason I got it into my head that I wanted shrimp enchiladas. Mind you, I’ve never once ordered shrimp enchiladas at a Mexican restaurant so I can’t for the life of me figure out where the craving came from. But there it was and so off I went to find the perfect recipe. 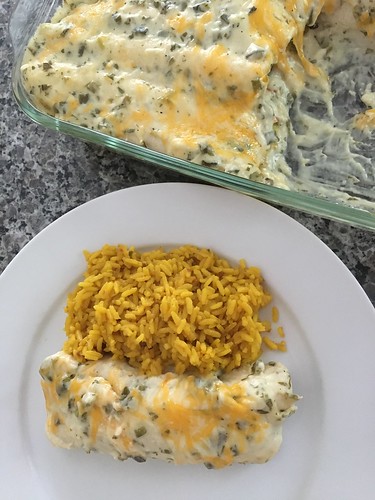 I ended up combining recipes from two of my favorite bloggers and the results were sensational. A word of warning, though – these are a wee bit time consuming for a weeknight. There’s nothing complicated about the recipe, it’s just a lot to put together between peeling and roasting the shrimp, roasting the poblanos, making the sauce, and cooking the filling. Work has been insane so I’ve been trying to do dinner prep either early in the morning or late at night. I highly recommend cooking all the components ahead of time. Then you can assemble the enchiladas right before you bake them. 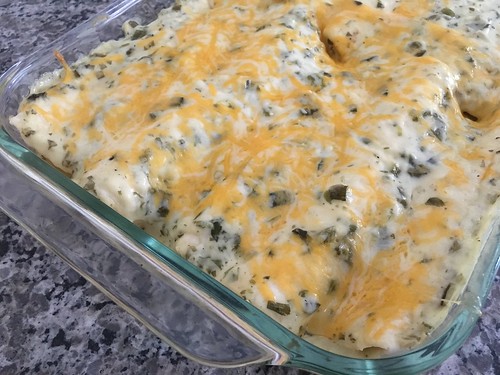 Preheat oven to 400. Place shrimp onto a baking sheet. Add 1 tablespoon olive oil, salt and pepper, and gently toss to combine. Place into oven and roast just until pink, firm and cooked through, about 6 minutes. Remove from oven and let cool before dicing into bite-size pieces. Reduce oven temperature to 375.

If you have a gas stove, place the peppers directly on the burner over the flame and roast, turning often, until the skin is blistered and black all over. If you have an electric stove, preheat the oven to 475˚ F. Place the peppers in a baking dish. Bake, turning every 6-8 minutes or so, until the skin is blistered over most of the surface about 20-25 minutes total. Transfer the peppers to a bowl, cover with a plate or plastic wrap and let sit 15 minutes. When cool enough to handle, peel away the skin, stem, seeds and ribs and discard. Coarsely chop the peppers and set aside.

To make the sauce, melt the butter in a medium saucepan. Stir in the chopped poblanos. Sprinkle in the flour and stir, cooking briefly just until golden, about 1-2 minutes. Whisk in the broth and garlic powder. Season with salt and pepper to taste. Let cook over medium heat, stirring frequently, until the mixture bubbles and thickens. Remove from the heat and stir in the sour cream and cilantro.

To assemble the enchiladas, spoon half the sauce over the bottom of a 9×13″ baking dish. Lay one tortilla on a flat surface and add some of the cheese, along with some of the shrimp mixture to the center. Roll the tortilla and place seam side down onto prepared baking dish. Repeat with remaining tortillas and shrimp mixture. Pour the rest of the sauce evenly over the top and cover with the remaining cheese. Place into oven and bake, covered, until lightly golden and bubbly, about 20 minutes.