We love a good carbonara around here. It’s been a while since I made a new variation, so when I was reading a book that mentioned pasta carbonara I knew it was a sign. And thus, Shrimp Carbonara was born. 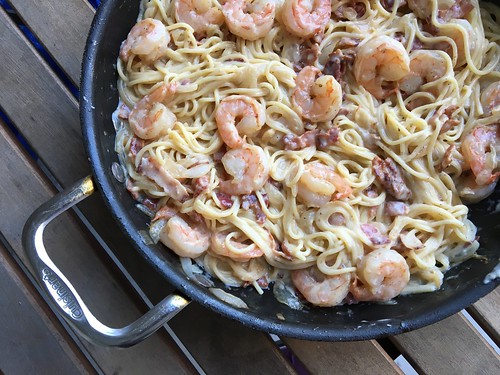 I’m not sure why it never occurred to me to make this before but now that I have, it will definitely become a regular thing. All I did was add shrimp to my standard carbonara recipe. I mean, what’s not to love about shrimp cooked in bacon fat? Positively delicious.

Cook pasta according to package directions. Drain and set aside.

In a large skillet that will fit the pasta later, cook the bacon until crispy but not crunchy. Remove with a slotted spoon, leaving the bacon grease in the pan.

While the bacon is cooking, pat the shrimp dry with paper towels and season with salt and pepper. After you’ve removed the bacon from the pan, add the shrimp in an even layer. Cook the shrimp until they’re pink on both sides, about 2 minutes per side. Remove to the plate with the bacon.

Add the sliced onions to the pan and cook until softened and starting to caramelize, about 15 minutes. Add the vermouth and let it bubble so that, after a few minutes, you have a small amount of thick syrup left.

While the vermouth is reducing, beat together the eggs, Parmesan, cream, pepper and nutmeg in a bowl.

Once you have a nice syrup, add the pasta to the pan, tossing well to coat with the sauce. Take the pan off the heat (remove from the stove completely, don’t just turn off the burner) and add the egg and cheese mixture, swiftly tossing everything with tongs to mix well. Add the bacon and shrimp and toss again. Taste and season with some more pepper and grated cheese, if desired.