I’m not a soup person. Actually, I’m not a hot liquids person. I don’t drink coffee or tea, I don’t really like hot chocolate and I can take or leave soup. On second thought, I take that back. I like soup in small amounts, as a side dish or appetizer, but soup as a main dish doesn’t do it for me. There are very few soup recipes I’ll make more than once. 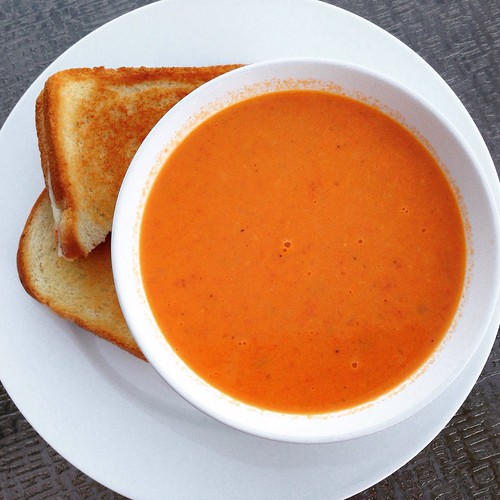 But this roasted tomato soup from my friend Cassie (who appears to have stopped blogging – what’s up with that, Cassie?) is definitely going on the short list. Not only is it easy to make, it’s delicious. The tomato flavor really shines and roasting the tomatoes gives them a wonderful depth of flavor. I served it with grilled cheese (duh) and salad and enjoyed every bite.

Preheat the oven to 400 degrees.

Wash the tomatoes, remove the cores and cut them in half (or into quarters if they’re particularly large). Spread the tomatoes onto a baking sheet and drizzle a few tablespoons of olive oil. Season with salt and pepper. Toss to coat all the tomatoes evenly, then roast for 30 minutes until caramelized. Remove from the oven and allow to cool. Remove the tomato skins and discard. Set aside until ready to make the soup.

Melt butter in a Dutch oven over medium-high heat. Add the onion, celery and bay leaves. Season with salt and pepper, and cook until onions are translucent and starting to brown, about 10 minutes. Stir in the garlic and cook until fragrant, about 30 seconds.

Add the tomatoes, along with the chicken stock. Bring to a boil, then reduce the heat and simmer for 15 to 20 minutes until liquid has reduced by a third. Remove the bay leaves and discard.

Use an immersion blender to puree the soup until smooth. You can also use a regular blender or food processor to do this – just be careful not to overfill either since the soup will be hot. Over low heat, add the half and half. Cook for 5 minutes, then taste the soup and add more salt and freshly ground black pepper, if necessary.