I don’t know when or how it happened, but I think it’s time to admit that the concept of soup has grown on me. I used to claim that I wasn’t a big fan of soup, but at some point I decided it wasn’t so bad. The right recipes are not only tasty, they’re also easy to make. I love a good one-pot meal as much as the next busy working mom, so there’s something wonderful about throwing a bunch of ingredients together in one pot and having it turn into a delicious dinner.

Take this Chick-Fil-A Chicken Tortilla Soup. Katie’s blog is a staple for me, so when I saw this recipe I immediately printed it off despite not really reading the directions. I decided to make it for Halloween dinner and figured I would need to chop up the chicken, saute it, etc. NOPE! You literally put everything into the pot, bring to a boil, simmer, shred the chicken and serve. What?! Yup! 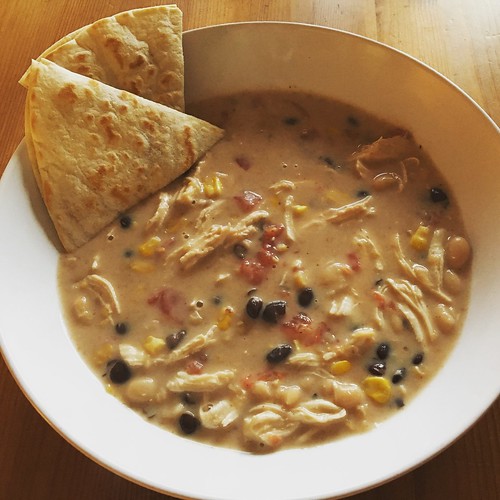 And the result was positively sensational. There’s a mild heat from the Rotel and a silky creaminess from the flour and the half-and-half. I served plain ol’ cheese quesadillas on the side and we all enjoyed dipping them into the soup. Such a great, simple weeknight meal that’s chock-full of flavor. Thanks for an awesome recipe, Katie!

Restaurant Knockoff: Chick-Fil-A Chicken Tortilla Soup
As seen on So Tasty, So Yummy

In a large Dutch oven, combine the chicken through the oregano. Stir to combine. Whisk together the flour and water to make a slurry, then stir it into the soup. Bring the pot to a boil over medium-high heat, then reduce the heat to low. Cover and cook for 30 minutes.

Remove the chicken from the soup. Shred with two forks, then return the chicken to the pot and stir in the half-and-half.

MAKE IT IN A SLOW COOKER: Add all the ingredients (except the half-and-half) as outlined above to a slow cooker. Cover and cook on low for 6 to 8 hours. Stir in the half and half 20 minutes before you’re ready to serve.