I can’t believe I’ve been making these corn fritters for 7 years already. They’re so easy and the flavor is incredible. The last few times I’ve made them Baby Girl helped by stirring all the ingredients together in the bowl. 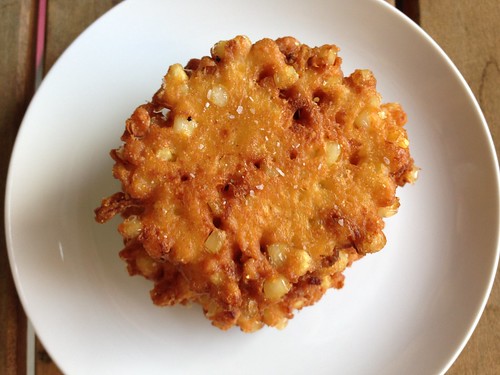 My original post didn’t even include a photo (what was I thinking?) and since that post was back in 2007 I figured it was time to bring it back from the archives while corn was still in season (although I’m cutting it a bit close). We usually eat them plain, but you could serve them with a dipping sauce or top them with mozzarella, tomato and basil. We rarely have leftovers but if you did, you could serve them with a fried egg the next morning. 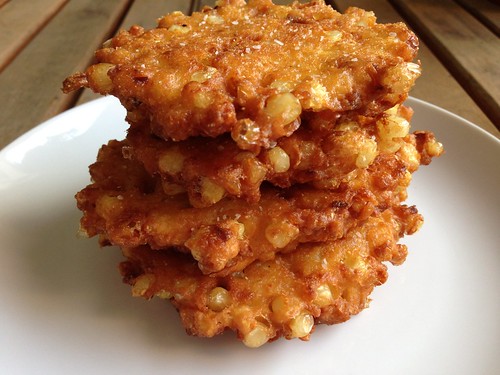 If you can still get farm-fresh corn you need to make these ASAP. I’m kicking myself for not putting corn on the shopping list this week.

Using a chef’s knife, cut the kernels from 1 to 2 ears of corn (depending on size) and place in a large bowl. You should have about 1 cup of whole kernels. Grate the kernels from the remaining ears of corn on the large holes of a box grater. You should have a generous 1/2 cup of grated kernels. Add to the bowl with the whole kernels. Using the back of a butter knife, scrape any remaining pulp from all the cobs and put in the bowl. Stir in the egg, flour, cornmeal, cream, shallot, and salt.

Heat oil in a large heavy-bottomed non-stick skillet over medium-high heat until shimmering. Drop 6 heaping tablespoons of batter into the pan. Fry until golden brown, about 5 minutes per side. Leave them alone until you see them starting to brown around the edges, then carefully flip them over to cook on the second side.

Transfer fritters to a plate lined with paper towels. Sprinkle with some salt. Fry the remaining batter. Serve immediately.