I’ve been making these Texas BBQ Chicken Quesadillas for years but I’ve never blogged them properly, with an actual recipe and a decent photo. I made them for dinner tonight and figured now was as good a time as any, seeing as some Facebook friends were asking for the recipe. 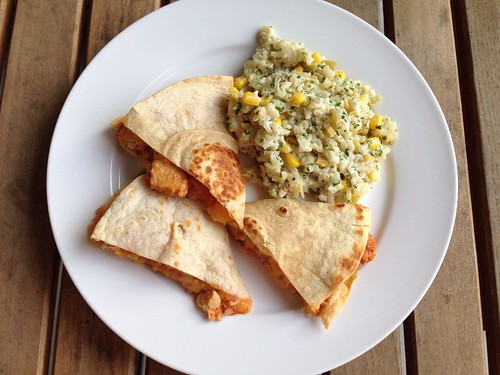 Use your favorite BBQ sauce for the chicken. We like Dinosaur sauce.

Preheat the oven to 350. Line a baking sheet with foil.

Heat 1 tablespoon of the oil in a pan over medium high heat. Add the onions and cook until they begin to caramelize, stirring often, about 20 minutes. Turn the heat down if the onions are browning too quickly. You want them to be soft and deeply brown. Mix in the honey and stir to combine. Remove the onions to a bowl and set aside.

Put the remaining 1 tablespoon oil in the pan and add the chicken. Cook over medium high heat until cooked through, about 5 minutes. Off heat, stir in the BBQ sauce to evenly coat the chicken.

Once all the quesadillas have been assembled, put the baking sheet in the oven for about 10-15 minutes to melt the cheese.