These crash hot potatoes were all the rage back in 2008. Like most food bloggers, I made them a few times and then they fell off my radar. 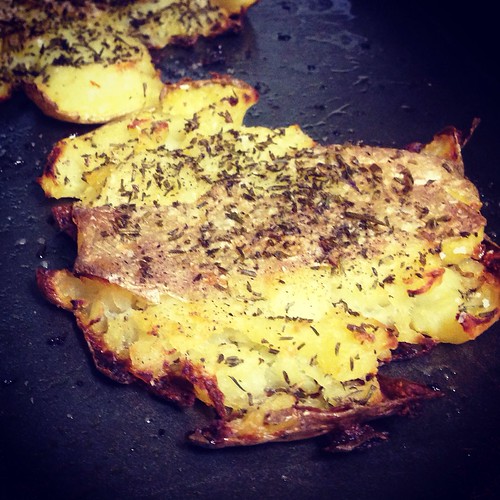 Recently, I was looking for a side dish to go with burgers. I had planned to make potato salad, but the day got away from me. Normally I’d go with my standby roasted potatoes, but we were out of red potatoes. It was late afternoon and I had no clue what to make with my basket full of Yukon golds. I Googled Yukon gold potatoes and side dish and while these potatoes didn’t come up in the initial search, something I clicked on reminded me of them and off I went.

Baby Girl, being the insane child she is, doesn’t like potatoes. She took a tiny nibble and then said “no thank you.” She won’t eat French fries, mashed potatoes, tater tots, home fries, etc. either. Weirdo. SP and I loved them. He was especially enamored of them, so much so that he insisted I make them again the following night. They do take a bit of planning ahead because you have to boil the potatoes whole, smash them and then bake them, but the hands-on time is minimal. I used fresh herbs from my garden (rosemary and thyme), which was the perfect combination. And I love that you can make as many as you want – I made four the first night and five the next and we ate the leftovers the next day, reheated in the toasted oven to try to bring back some of the crispiness.

Crash Hot Potatoes
As seen on The Pioneer Woman

Small Yukon gold potatoes (as many as you want to serve)
Olive oil
Kosher salt, to taste
Black pepper, to taste
Fresh rosemary and thyme, to taste

Scrub the potatoes well and place in a large pot. Try to choose potatoes that are roughly the same size so they’ll all cook at the same rate. Cover the potatoes with cold water and add some salt. Place the lid on the pot and bring to a boil. Cook the potatoes for 20 minutes, or until they are fork-tender.

Drizzle some olive oil on a baking sheet and use a pastry brush to spread the oil evenly. Drain the potatoes and place them on the baking sheet, leaving plenty of room between each potato.

Using a potato masher, gently press down on each potato until it flattens. Brush the tops of each crushed potato with more olive oil. Sprinkle the potatoes with plenty of kosher salt, fresh ground black pepper and fresh chopped rosemary and thyme.

Bake in a 450 degree oven for 20-25 minutes until golden brown and crispy. Serve hot.