I first posted this recipe waaaaay back in 2007 so I thought it was time for an update. For starters, the original photo is cringe worthy but I’ve also tweaked the prep a bit since then. 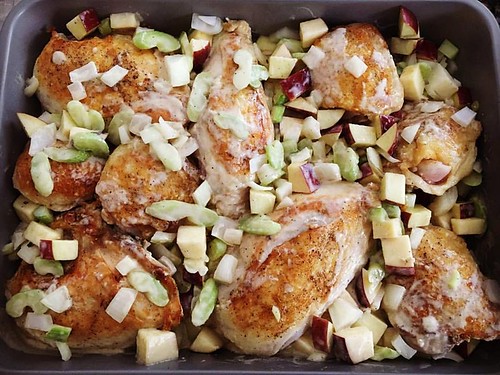 Quick reminder of this recipe’s origin – my mom first made this recipe in the summer of 1973. This was the first summer (while she was in college) that she didn’t go home. She was looking for a recipe to make, probably for a boyfriend, and came across this one. She doesn’t remember where she saw it, but her copy calls for wine instead of apple juice. One time she was making it for a group of people and didn’t have wine so she decided to substitute apple juice. We all prefer it that way, but you can decide. This is an authentic tried and true recipe for going on 44 years!

She also claims it makes a knock-out chicken salad the next day but I’ve never had enough leftover to try it.

Preheat the oven to 350 degrees.

Heat the oil in a large skillet or Dutch oven over medium-high heat. Add the chicken and brown on both sides.

Place the chicken in a large baking dish and cover with the onion, celery and apple. Pour off all but 1 tablespoon of oil from the skillet and add the flour, stirring until it’s incorporated. Add the apple juice and whisk until thickened. Remove the skillet from the heat and add the sour cream. Season with salt and pepper to taste and pour over the chicken.

Cover the baking dish with foil and bake for an hour. Uncover and bake another 30 minutes.

When the chicken is done, remove to a plate and cover the baking dish to keep the sauce warm. Once the chicken has cooled enough to handle it (I usually put the plate in the fridge for 30 minutes), remove the meat and pull into bite-size pieces with your fingers, discarding the skin and bones. Toss the chicken pieces with the sauce.