The theme for our latest dinner with our friends C & T was Asian food. We usually pick one recipe to make at T’s house and this time we chose Steamed Dumplings. I’ve never made dumplings before and incorrectly assumed they’d be a lot of work. Nope! 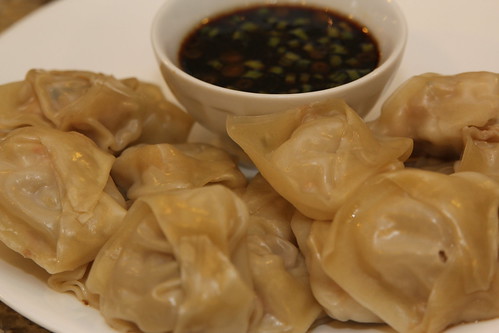 (all photos by T. Casey)

T always cons me into doing all the work (just kidding, I love cooking in her gorgeous kitchen). After I mixed up the filling we assembled the first batch, placing up a little bit of filling onto each dumpling wrapper, wiping the edges with water, and then folding the dough into a triangle. Then we pinched the two edges together to make little packages. 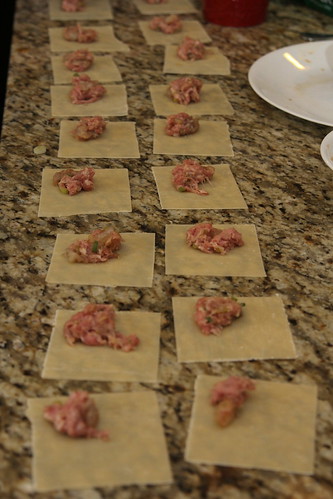 SP and I got a bamboo steamer as a wedding present and had never used it. Oops! We lined the bottom with cabbage leaves, placed the dumplings on top and set it over a pot of boiling water for 10 minutes. 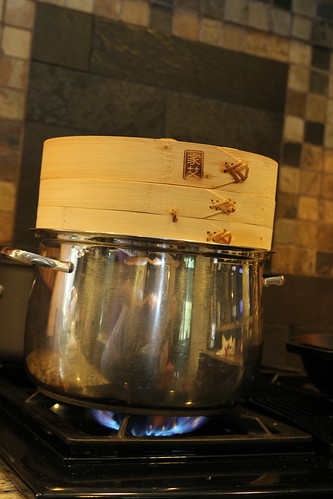 These dumplings were outstanding. They had great flavor from the filling and the dipping sauce (which mirrored those same flavors) was perfect. We all gobbled them up. We doubled the recipe below so we had 40+ dumplings for 6 adults and 2 kids and it wasn’t enough. Thankfully we had extra filling and T had more wrappers in her fridge, so I quickly assembled another 20 dumplings. The kids would run into the room, grab a handful of dumplings off the platter and run off to play, then come back for more. So, so good. 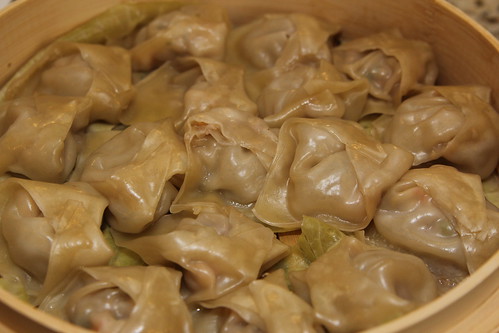 I can’t wait to make these again. My mom has already put her in request.

Combine the ground pork, shrimp, chopped scallions, ginger, and all the seasonings together. Mix well and set aside.

To make dumplings, place a small spoonful of the filling in the center of a wrapper. Dab a little water with your finger and circle around the edge of the skin, and then fold and pleat the dumpling accordingly. Repeat the same for the rest.

Arrange the dumplings in a bamboo steamer (lined with parchment paper or cabbage leaves at the bottom) and steam for 8-10 minutes. Serve immediately with dipping sauce.

To pan fry the dumplings: heat a large skillet and swirl some oil around to coat the pan. Add a single layer of pot stickers. Cook for 2 to 3 minutes until they begin to turn golden on the underside. Don’t move them. Add 1/4 cup of water to the pan and cover immediately. Cook for 5 minutes, or until the meat is cooked through and the dumplings release from the pan. Serve immediately with the dipping sauce.

Combine all ingredients for the dipping sauce in a small bowl.