I try not to label something as “the best” or “the ultimate” because everyone’s tastes are different. Plus, it feels like a major cop-out as a writer to use so many superlatives. That being said, this roast pork and broccoli rabe pizza is probably one of the best pizzas I’ve ever made. 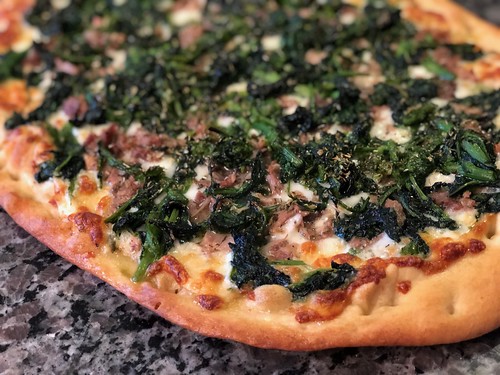 I also try not to go into long, rambling stories when all people want to see is the recipe but hear me out. I’ll be quick. We used to go to a local restaurant every Saturday for their roast pork with broccoli rabe sandwiches. They were amazing. The pork had just the right amount of seasoning and a nice kick from hot peppers. It was the highlight of my week. Long story short, the place went downhill and we haven’t gone there in years. But I still dream about that sandwich. This recipe – both the sandwiches and the pizza – remind me of the heyday of that restaurant. And that makes me very, very happy.

The original sandwiches, which I made back in May and never blogged (ooops), were delicious but the pizza was even better. In fact, Steve said we should make another pork roast just for this pizza. As I often do, I squirreled away a bit of the meat for just this occasion. I happened to find it in the freezer last week and this pizza was born. Katie thought there was a wee bit too much broccoli rabe, but Steve and I disagreed. As always, use however much you like.

I’m including the instructions for the sandwiches and the pizza below since you’ll have quite a bit of meat.

Transfer pork to large plate. Transfer braising liquid to 4-cup liquid measuring cup; add extra broth, if necessary, to equal 3 cups. Let pork and liquid cool completely, about 1 hour. Cover and refrigerate both for at least 1 hour or up to 2 days.

Heat oil and garlic in Dutch oven over medium heat until garlic is golden brown, 3 to 5 minutes. Add broccoli rabe, salt, and pepper flakes and cook, stirring occasionally, until tender, 4 to 6 minutes. Transfer to bowl.

About 20 minutes before serving, adjust oven rack to middle position and heat oven to 450 degrees. Remove twine and cut cooled pork in half lengthwise to make 2 even-size roasts. Position roasts cut side down and slice each crosswise as thin as possible.

Spoon solidified fat off cooled jus and discard. Transfer jus to Dutch oven and bring to boil over high heat. Reduce heat to low, add pork, cover, and cook until pork is heated through, about 3 minutes, tossing occasionally. Cover and keep warm.

IF MAKING INTO SANDWICHES:
Arrange rolls on 2 rimmed baking sheets (4 rolls per sheet). Divide provolone evenly among rolls. Bake, 1 sheet at a time, until cheese is melted and rolls are warmed, about 3 minutes. Using tongs, divide pork and broccoli rabe evenly among rolls (about 1 cup pork and ⅓ cup broccoli rabe per roll). Serve, passing any remaining jus separately.

TURNING LEFTOVER PORK INTO PIZZA:
Defrost the pork you squirreled away and make another order of the garlicky broccoli rabe. Preheat your pizza stone in a 500-degree oven for at least an hour.

Sprinkle a square of parchment paper the size of your pizza stone with flour and roll the dough into a 14-inch round. Drizzle some olive oil on top and rub to coat all the dough. Top with the mozzarella. Arrange the four slices of provolone so they cover as much of the mozzarella as possible.

Reheat the pork so it’s lukewarm. Distribute evenly on top of the cheese. Do the same for the broccoli rabe. Add a shake or two of dried oregano, if desired.

Transfer the parchment paper to the preheated baking stone and bake for 15 minutes, checking often to make sure there are no bubbles forming. I keep a poking stick handy to pop them during the first 5 minutes.

Remove from the oven and add more red pepper flakes, to taste.