We recently went to Southern California to visit my dad and stepmom. On the way home we were lucky enough to fly out of John Wayne Airport in Orange County, which despite being a very small airport has a surprising number of decent eateries. At least compared to Newark Airport. Ugh. I will never forget the truly awful, inedible bagel sandwich I had on the flight out. Blech. 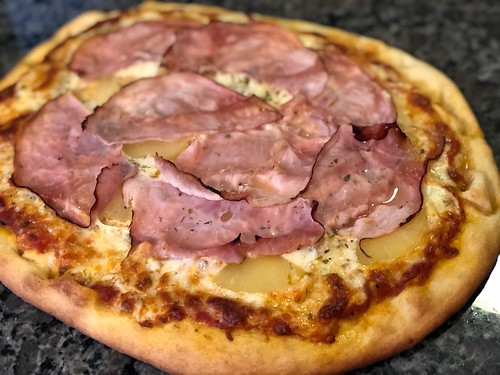 Anyway. Steve and Katie decided to split a Hawaiian pizza from California Pizza Kitchen and immediately asked me to recreate it at home. I’ve been making Hawaiian pizza for years. It’s Katie’s all-time favorite and I usually make it with cubed ham and caramelized pineapple, which is freakin’ delicious. But they asked for this version, with thinly sliced ham and larger slices of pineapple, so I acquiesced.

Place a pizza stone in your oven and preheat the oven to 500 degrees.

Lay a piece of parchment paper the size of the pizza stone on a work surface. Dust lightly with flour and roll out the pizza dough into a 14-inch circle. Spread the pizza sauce in a thin layer over the dough, leaving a half-inch margin around the outer edges. Sprinkle the shredded mozzarella over the top, then add the pieces of ham and pineapple. Dust with some oregano and garlic salt, to taste.

Transfer the pizza on the parchment paper to the pizza stone. Bake for 15 minutes, checking often to make sure there are no bubbles forming. I keep a poking stick handy to pop them during the first 5 minutes.

Remove the pizza from the oven and allow it to rest for 5 minutes before slicing.