Lately, it’s been rare for ootd photos to be uploaded on snapgram, then add the highlight #ootd. The reason is because my college days are not as busy as the first week. Even though my friends say, “Bella’s trademark is that she puts a snapgram in her ootd photo, then the style is different” wkwkwk.
Now blogging is also not as active as it was originally planned. I want to post at least once a week, but every day off I never have time to make content, hey. Yesterday was Thursday, the red day. He wanted to write, but he was asked to leave. Alright, here’s the forced content :))))
For those of you who like to say “Bella’s clothes are how many wardrobes, how come you change your mouth”, I’ll explain this, wkwkwk
Yesterday, Thursday, she was invited to join her mother’s reunion with her high school friends. Then gave the new year h-1 hour. I panicked because I had not prepared clothes, ironing, and various things. Then I saw that there was a hood that had been ironed but not worn, so I finally found the right clothes matchingsame hood. 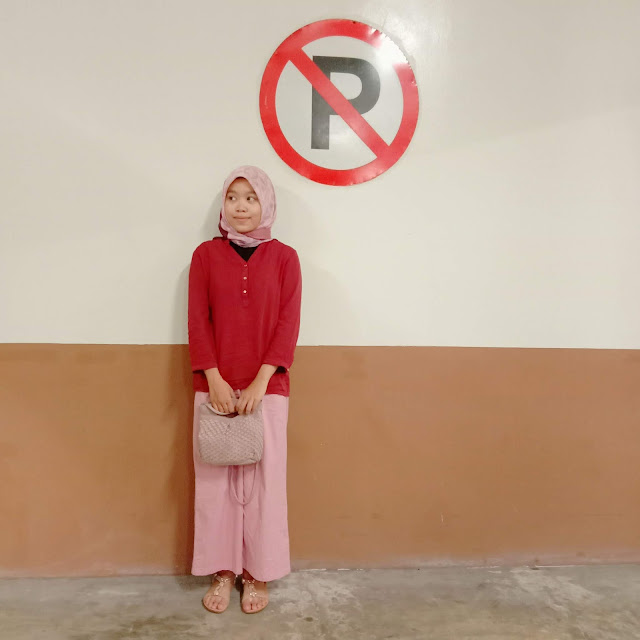 Starting from the veil, it belongs to the mother. Shirt, I have a sister but it’s too small, so I’m wearing it. Yes, my sister is bigger than me. Then the culottes, have a sister too wkwk. Then the bag and sandals, I’ve used it everywhere :)))
So that’s the reason why I can change the mouth of the clothes. Because the clothes are in 3 cupboards. My closet, mother’s closet, sister’s closet. Hehehe.
Hey guys, I love #makeupoftheday WKWK. As well as a brief review, yes. Btw, that’s the photo I took after eating, so I lost the lipstick 🙂 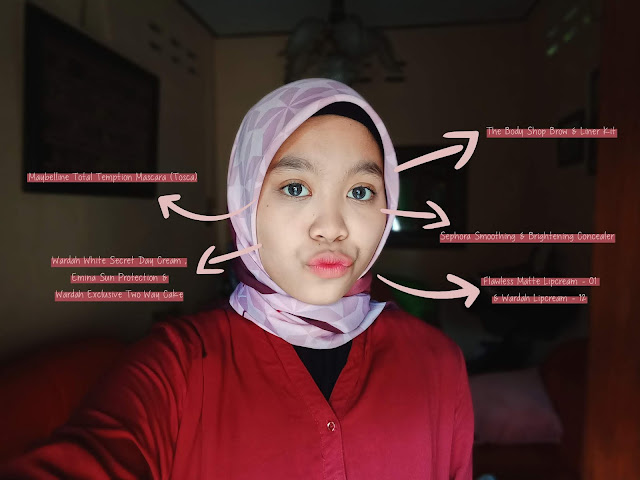 For those who often ask “what skincare bella use”, that’s my dear friend. I used Wardah’s White Secret day cream (without the night cream because I’m too lazy), then it was overwritten with Emina Sun Protection. After that, I used concealer because my eye bags are black like pandas. If you see me in the evening or at night on campus, I already have items under my eyes, yes, that’s the original color of my eye bags 🙁 So basically, this Sephora concealer doesn’t last that long. But if you use it in the early afternoon or evening, it’s still okay. Oh yeah, sometimes I use Wardah’s dd cream as a concealer, just in the mood. After using concealer, I set a two way cake on some parts that look glazed. I’m talking about why it ‘skips’ like that. Yes, that’s basically it yes babe.
Well, when I went yesterday, I wore my eyebrows, usually I don’t go to campus, wow. Yes, that’s just how I’m not good at + I can’t review because I don’t understand the world of per-writing 🙁
Truly mascara. THE BEST BGT I swear this mascara. It doesn’t bleed, it doesn’t make your lashes fall out, because my lashes fell out 3 today because of using another mascara 🙁 I’m so sad. I swear you have to try Maybelline Total Temption Mascara which is Waterproof in Tosca color!!!!
For the lipstick, I have reviewed it on here yeah
It’s okay, that’s all, the title and the contents of the post are not connected. Btw, this seems like the most blatant post, sorry.
It’s almost Sunday night, gangs. 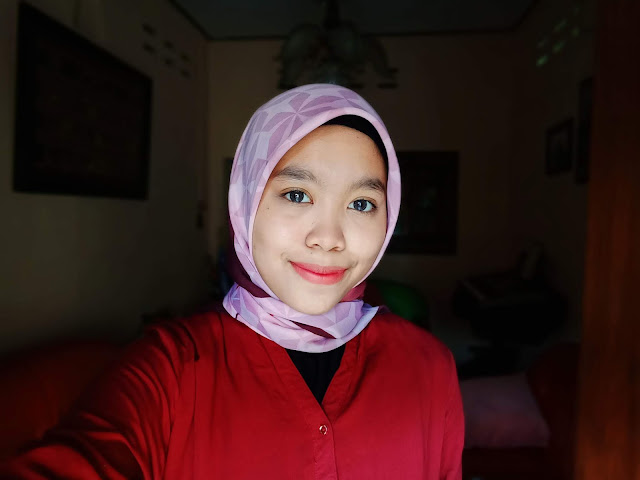