I love when my friends post on Facebook about the meals they make, especially when they include a recipe. As much as I love reading food blogs, many of the ones I follow simply don’t cook the way I do. They post all sorts of fancy, trendy meals that I just know in my heart I’m never going to make for my family. So when I see posts from friends about food they’re actually cooking, I pay attention.

Take this recipe for Pasta with Shrimp, Brie and Tomatoes. I was hooked as soon as I saw my friend’s photo. This recipe has it all – pasta, one of my favorite cheeses, fresh tomatoes and shrimp. And, bonus, it’s a one-pot meal. What’s not to love? 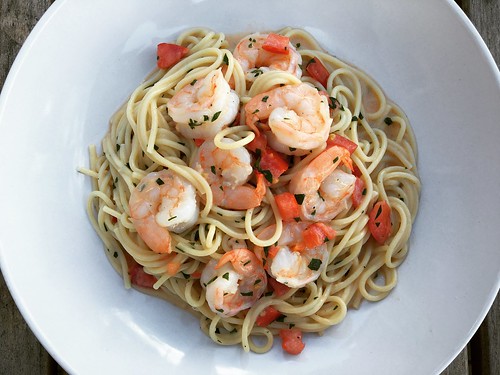 The original recipe calls for sundried tomatoes and Kalamata olives, both of which I left out, opting instead for all fresh tomatoes, and no olives simply to save Steve from going to the olive bar at Wegmans. This really couldn’t be simpler – mix the Brie with the tomatoes and seasoning, cook the pasta and, in the last few minutes of cooking, add in the shrimp. When the pasta is done, toss everything together and serve. I can’t wait to make this one again.

Remove the rind from the Brie, if desired. Cut the Brie into pieces and add it to a bowl along with the tomatoes, garlic, basil, salt and pepper and olive oil. Toss to combine, then cover and let stand at least one hour.

Cook pasta in boiling salted water according to package directions. Add the shrimp two minutes before the pasta is done. Finish cooking, then drain well. Immediately toss the pasta and shrimp with the Brie mixture. Serve immediately with freshly grated Parmesan.