We have spent 302 days together. From happy to sad, sad and satisfied, to upset and happy. I never thought I would have someone as close as you. Yes, even though they are united because of ‘task’ :>
I don’t know what made the three of us around each other that day. Looking for each other. Calm and calm each other. Encourage each other. Until finally dropped in the lobby because I was super tired. Yes, consciously or not, we were brought closer from then on. Until that night, we were destined to be together :)) You are the 2 worst people of all time. His friend was washed and cold until he cried :))) uh, you run away laughing:))) Hm:)))
Have you ever felt sorry for being trapped in this triple circle? But if you do it, it’s a lot of fun too.
We start our ‘task’ with the mundas, the committee mundas. Want to get together but one is busy looking for money wkwk. Going through a difficult time because of one complicated thing, which finally got mixed up in multichat, the emotions couldn’t be contained :’) Always the three of them, until they were bored, not together. Want to eat, chat on multichat, invite to eat wkwk. Talking about having fun too, but yeah, it’s just a talk, isn’t it :))
The story of the three of us in our big event is also cute and adorable:3 All three of us have the same ‘role’ in it, but with different tasks. But still, let’s catch up on multichat :)) All kinds of busyness that we have to go through, the ‘accidents’ that we have to go through, basically, we’ve already gone through. Ehehehe.
I don’t know, I remember the time we supported each other even though the conditions were very unlikely. Maybe what surprised me was that I was super down on d-1, you guys must be down too, but still want to help me wake up :’) Remember when we fell asleep on the balcony while sorting out seat numbers at 1 or 2 in the morning. Until finally when everything is finished, all the burden immediately disappears. We look for each other, to congratulate each other for all that we have been through & sacrificed. Including sacrificing a contemporaneous vacation to Bali:’) Let’s just go to GSP, okay:’) Trying to say ‘it’s okay’ when we see other people use Sundays to rest/play, but our Sundays are just for …… practice .

We never believe in ourselves, often in fact. But in the end everything went smoothly as we hoped. It’s just a problem sometimes you’re not sure, right?

How many days are we left on one ‘task’? You have to start chasing what you’ve been left behind. Keep it up, my trio! 🙂 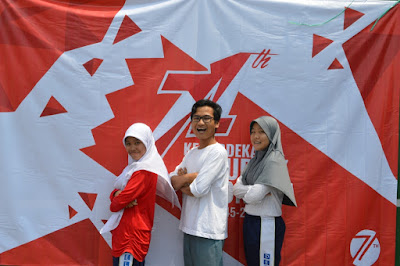