My friend Mary Ellen made this Grilled Ciabatta Bread Salad for us twice before I finally got off my butt and made it myself. It’s one of SP’s favorite salads so he’s been bugging me to make it. 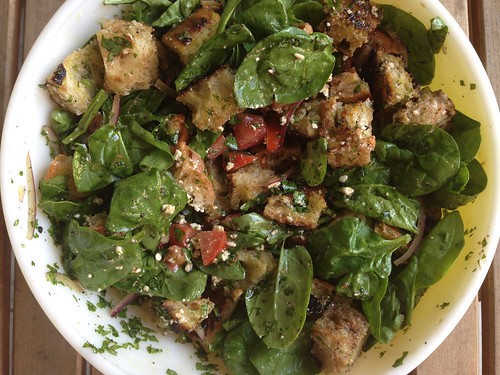 We have a charcoal grill, which makes it harder to control the heat of the fire. My bread got pretty blackened so I had to cut some sections off (I really dislike overly charred food), but that was no big deal. This made a TON of salad, way more than the three of us could eat, so next time I’ll cut the recipe in half or just make it when we have company.

Place onions, cilantro and 1/2 cup olive oil in a large bowl and toss together. Let marinate in the fridge while you grill the bread.

Slice the bread into two long halves. Spray or brush with cooking spray/olive oil, season with salt and pepper and grill until charred on both sides.

Let the bread rest until it’s cool enough to handle, then chop into 1 inch pieces. Add bread cubes to the onion and cilantro mixture, along with the remaining 1/2 cup olive oil. Chill at least 30 minutes.

Before serving, add the tomatoes, spinach and cheese. Toss with the balsamic (start slowly and add to taste), salt, pepper and oregano to taste. Serve immediately