A few months ago I came to the realization that I only like fried eggplant. Well, that’s partially true because I also like Chinese eggplant with garlic sauce. Anyway, I’ve tried cooking eggplant in pasta sauces or grilling it, but I’m just not a fan.

Recently I was thinking about a recipe I’d seen years ago for fried eggplant stacked together with prosciutto and mozzarella cheese. I got it in my head to try recreating it, preparing the eggplant the same way I do my eggplant rollatini. 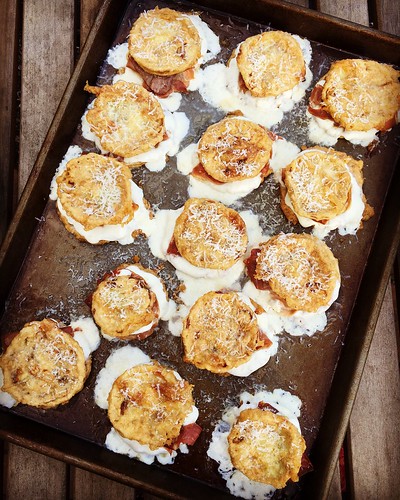 The results were outstanding. Despite being fried, the eggplant is light without being greasy. The prosciutto crisps up nicely in the oven and the melty mozzarella is perfection. Steve (and Katie, for that matter, but she was away when I made this meal) like everything I cook. But it’s rare for Steve to actually rave about a meal. But this one he could not stop talking about. I texted him the next day to ask whether the eggplant stacks reheated well and he said they did and that he was in love with them. 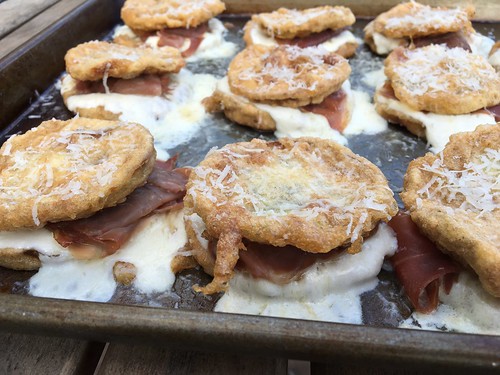 As you saw in yesterday’s post, I served this alongside spaghetti in a light, flavorful sauce made simply with butter, chicken broth, lemon juice and capers. It was the perfect side dish for this meal. I had two small-ish eggplants and they yielded 14 stacks, which was the perfect amount for me and Steve. If Katie had been home we’d have been in trouble, so keep that in mind if you’re cooking for a larger crowd.

And speaking of crowds, these were great warm or room temperature, making them perfect for a party. I ate mine with my hands when cutting into the prosciutto proved challenging. So, so good.

Preheat the oven to 350 degrees. Pour 1/2″ of vegetable oil into a medium skillet and heat over medium-high heat.

Add as many of the coated eggplant slices to the pan as will fit without touching. Cook, turning once, until golden on both sides. Drain on a rack set over the same baking sheet you used to salt the eggplant. Repeat the process until all the eggplant is cooked.

Bake for about 15 minutes, until cheese is melted. Top with some grated cheese. These can be served warm or at room temperature.