My friend Amy over at Bellyfull recently posted a photo of these Cuban Taquitos on her Instagram page. I knew immediately that they’d be a huge hit. We all love the flavors in a Cuban sandwich but my usual recipe is much more time-consuming. These were so easy! 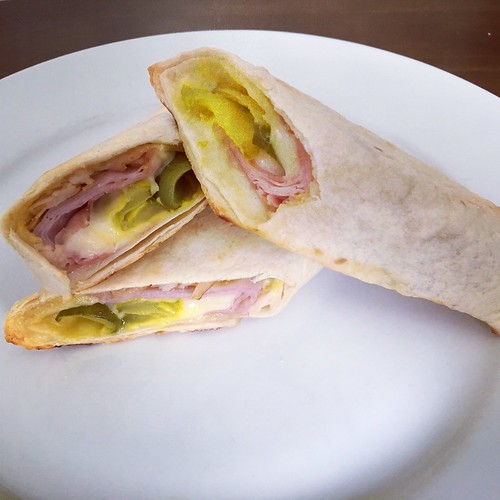 I guesstimated the amounts based on how we like our Cuban sandwiches and the results were perfect. I was only able to make one small (taco size) roll-up and four larger (fajita size) roll-ups so I adjusted the amounts below. I had the leftovers for lunch today and they reheat beautifully in the toaster oven.

Preheat the oven to 400 degrees.

Lay out your tortillas on a clean work surface. I find it easier to portion out amounts when you can do all of them at once. Spread some mayo on the bottom half of each tortilla. Squirt a little mustard on top of the mayo. Divide the ham and turkey evenly between the tortillas. You should be have at least two slices of each meat per tortilla. Layer on some of the Swiss and then top with one or two pickles.

Roll the tortillas as tightly as you can and place on a baking sheet lined with parchment paper that’s been sprayed with nonstick cooking spray. Spray the tops of the tortillas or baste with melted butter. Sprinkle some salt on top.

Bake for 10-12 minutes until the cheese is melted and the meat is hot.