I love the idea of a shrimp boil when we’re down the shore, but on a weeknight I need something quicker, easier and less messy. That’s where this Creamy Shrimp Boil Pasta comes in. All the flavors of a classic shrimp boil served with pasta instead of potatoes. 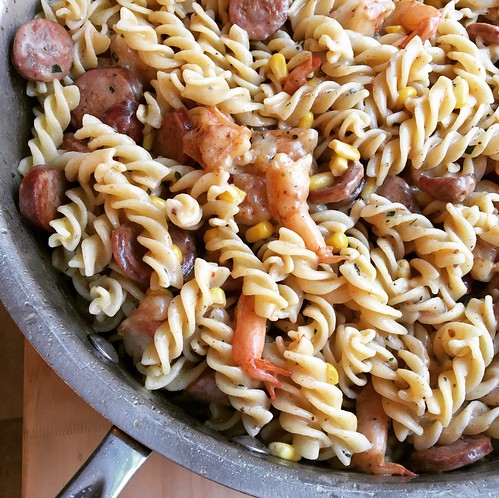 I lightened it up a bit by subbing half-and-half for the heavy cream. As I was making the sauce I realized the cream/half-and-half isn’t even necessary. It was a nice treat, but I think the pasta could stand alone with the other ingredients. Totally your call. We also thought it needed more corn, so I upped the amount in the recipe below. This was so delicious and easy to make on a busy summer weeknight.

Cook pasta according to package directions. Save 1 cup of the cooking water, then drain well.

Heat the olive oil in a large skillet over medium high heat. Add the sausage and cook, stirring frequently, until sausage is lightly browned, about 3-4 minutes. Place the sausage in a large bowl and set aside.

Season the shrimp with 1 1/2 teaspoons of Old Bay seasoning. Add the shrimp to the skillet and cook until pink, about 2-3 minutes. Remove from the pan to the same bowl as the sausage.

Melt the butter in the skillet. Add the garlic and cook, stirring frequently, until fragrant, about 1-2 minutes. Whisk in the flour and cook for 1 minute. Gradually whisk in the chicken broth, half-and-half, Parmesan, thyme and remaining 1 1/2 teaspoons Old Bay. Cook until slightly thickened, about 2-3 minutes. If the mixture is too thick, add more broth as needed. Season with salt and pepper, to taste.

Stir in the pasta, sausage, shrimp and corn. Toss to combine. Thin with some of the pasta cooking water, if needed. Serve immediately, garnished with chives, if desired.