This chicken pizzaiola is another one of those recipes that I’ve looked at countless times over the years and bypassed time and time again. Who knows why; it’s not like it’s a complicated recipe. My only note is to make sure you use plenty of pepperoni so you can really taste the flavor. 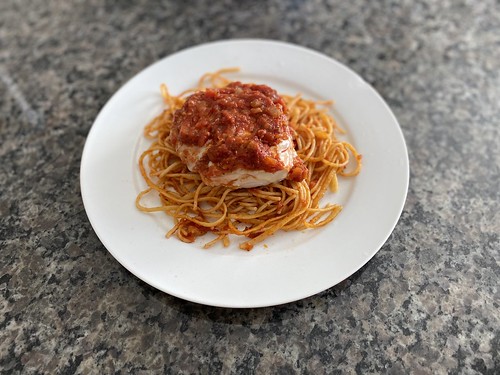 Such an easy, delicious weeknight meal. I made my own quick pasta sauce but jarred would be fine, too.

Heat the oven to 450. Spread pasta sauce into a 9×13 baking dish (I had 6 chicken breasts so I needed another small baking dish). Spread Parmesan/pecorino in a shallow dish.

Put one chicken breast at a time in a plastic food storage bag and pound to an even thickness. You don’t want it too thin but it should be the same thickness throughout. Season all the chicken with salt and pepper, then coat with Parmesan/pecorino. Lay each piece of chicken on top of the sauce in a single layer. Bake for 25 minutes.

While the chicken bakes, cook pasta. Drain and toss with some olive oil to prevent sticking. Set aside until the chicken is done.

Remove the chicken from the oven and top each breast with a few slices pepperoni and mozzarella. Increase oven to 475 and bake until cheese melts, about 5 minutes.

Spoon some sauce from the baking dish into the pasta pot and toss to combine. To serve, put some pasta on a plate and top with a piece of chicken and some sauce.

NOTES:
1. It’s really easy to throw together a quick pasta sauce. I usually just heat up a 28oz can of crushed tomatoes (rinse the can with some water and add to the pan so you get all the sauce from the can) and season with plenty of oregano. I had half an onion in the fridge so this time I minced that up and sauteed it in oil with some salt and pepper before adding the crushed tomatoes.