A few weeks ago I received an issue of Cook’s Country magazine. I used to be a subscriber, but in an effort to save money I cancelled my subscription awhile back. I’m not sure if this was a teaser issue to try to entice me back, but it doesn’t have a date on it so I’m assuming that’s what it is. SP went through it and picked out a few recipes for me to make, including this one for Chicken Parmesan Salad. 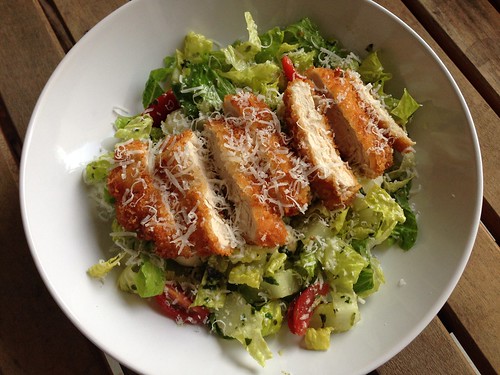 I made a few modifications – I switched up the breading method since I’ve found that panko adheres better when you coat the chicken in flour first, and I swapped out arugula for Romaine hearts since I always have a package on hand. If only I could buy arugula that didn’t spoil immediately… 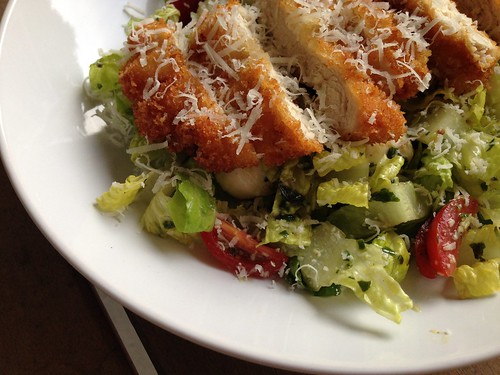 This was a great salad. We were all big fans. I mean, what’s not to like about crispy chicken and the summer trinity of tomatoes, mozzarella and basil? Because of Baby Girl’s nut allergy I didn’t make traditional pesto, simply processed basil leaves with a little oil, salt and pepper and then grated in some Pecorino cheese. I have to be honest – I haven’t made pesto with nuts in years and I don’t notice a difference.

Beat the egg in a shallow dish with a splash of water. Add the flour to a second shallow dish. Combine panko, 1/4 teaspoon salt and 1/4 teaspoon pepper in a third shallow dish. Season each chicken cutlet with salt and pepper. Working with one cutlet at a time, coat the cutlet in flour, then dip into the egg, and finally coat in the panko, pressing to adhere.

Heat 3 tablespoons of vegetable oil in a non-stick skillet over medium-high heat until shimmering. Cook 2 cutlets at a time until golden brown and crispy, about two minutes per side. Transfer to a paper towel-lined plate. Repeat with the remaining oil and chicken. Tent the chicken loosely with foil and let rest for 5 minutes.

Whisk the pesto and lemon zest and juice together in a large bowl. Add the tomatoes, arugula and bocconcini and toss to combine. Season with salt and pepper. Arrange the salad on a serving platter. Slice the chicken into strips and arrange on the salad. Serve.