This recipe for BBQ Chicken and Pineapple Lettuce Wraps with Cilantro Yogurt Sauce was so amazing I actually dusted off the ol’ food blog so I could share it with you. That’s really saying something since it’s been 4 months since I posted. Oops!! Life got seriously crazy and, while it’s still a whirlwind, these lettuce wraps are just too good not to share. 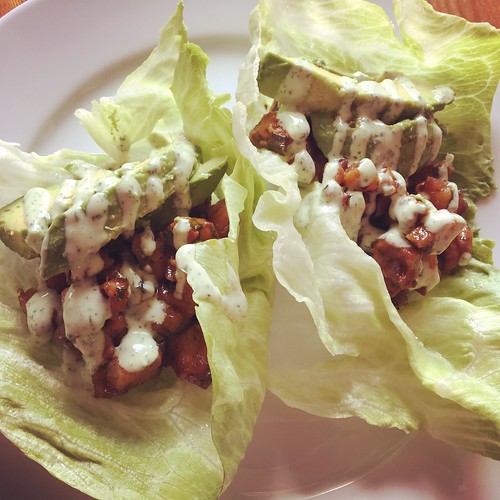 A quick recap of what’s been happening since we last spoke:

1. Katie stopped sleeping. She had a long sleepover at my parent’s house Thanksgiving weekend and while we don’t think anything happened to cause the sleep issues, that’s when it all started. She was scared to be alone, didn’t want to sleep, etc. This lasted about two long, painful months. We felt like we had a newborn again. No one was happy.

2. I was laid off. Downsizing sucks and I lost my job due to a reorg. My last day at my old company was December 9 and it was incredibly bittersweet.

3. I enjoyed unemployment. Well, for about a week I did. Ha! Due to the aforementioned sleep issues, this was a trying time for us. Plus we were all sick off and on for weeks on end. Winter was not kind to our family, that’s for sure. The week before I started my new job (more on that later) was the one week where I actually sat around and watched Call the Midwife and did a whole lot of nothing. It was glorious and over way too quickly.

4. We were sick. A lot. Despite being in daycare most of her life, Katie had a rough winter at public school. She’s had 5 colds and one turned into pneumonia (that was fun). I’m so ready for warmer weather!

5. I got a new job! Due to a crazy fortuitous series of events, I ended up finding a new job before my severance ran out. Yippee. I’m doing basically the same thing I was doing previously, just with a different company. I was sick as a dog with a horrific head cold while going through the interview process, but since this was another full-time work from home position, all my interviews were done over the phone (score!) It’s been tough getting settled in my new role, but well worth it because…

6. We sold our house/bought a new house! We’ve been stuck in our current home for 10 years (thanks, crash of 2008) and thought we’d never be able to get out from under it. But, we scrimped and saved and came up with what we thought was a two-year plan. Then I got the new job and the market in our town exploded and suddenly we were doing this NOW. We actually put the offer in on our new house the weekend before I started my new job and the offer was accepted on my first day of work. A month later we put our house on the market and it sold without ever officially being listed. It’s an insane story, really, and we’re still pinching ourselves over it. We closed on the new house last Friday and we’re having a lot of work done before we move in. The house was vacant for almost 2 years so it needs a lot of cosmetic stuff. It’s amazing what fresh paint can do! We close on our current house two weeks from tomorrow! Eeek!

Phew. I think you’re all caught up now so on to the recipe!!

Is it me or do lettuce wraps make you feel less guilt about eating whatever you’ve stuffed inside? I felt like I could eat 10 of these and not gain an ounce. Ha!

A few notes: I had one pound of chicken thighs in the freezer so I used those instead of chicken breasts. It wasn’t nearly enough. I’m doubling the recipe below so you have plenty of deliciousness to go around. I also left out the cashews due to Katie’s nut allergy. And I didn’t bother with the romaine and iceberg, despite having both in my fridge.

Don’t let the long ingredient list scare you. A lot of it is seasoning. These were so simple to throw together on a weeknight and I didn’t even bother with a side dish since you’ve got meat and veggies all in one spot. Make these now!!

Mix the salt, pepper, paprika, garlic and onion powder together in a small bowl. Season the chicken with the seasoning mix. Heat a large skillet over medium heat and add the olive oil. Add the chicken and cook until browned, about 6 to 8 minutes. Add the onion and brown sugar, stirring well to remove any brown bits from the pan. Cook for 5 minutes, or until golden brown. Stir in the pineapple and the BBQ sauce. Let cook for another 5 minutes.

To assemble the lettuce wraps, add some sliced avocado to the lettuce leaves, then top with a few spoonfuls of the chicken mixture. Add the green onions, cilantro and a drizzle of BBQ sauce, if desired. Finish off with the drizzle of the yogurt cilantro sauce.

To make the drizzle: add all ingredients to a food processor and blend until smooth.